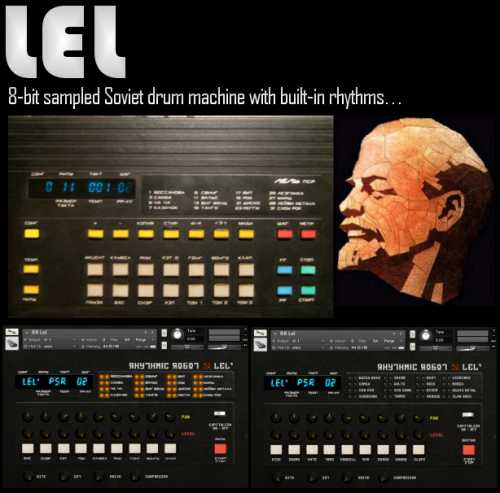 Comrades! For too long imperialist pigs of West have luxuriated in capitalist drum machines, built on blood of oppression and stained with sweat of poverty, while laughing up sleeves at inferior Soviet Socialist drum machines. No longer! Loyal Soviet scientists working in Party laboratories now reveal to you magnificent Lel PSR, glorious triumph of superior Soviet engineering. Unlike decadent so-called “doctors rhythm” and other Western indulgences, Lel is built like a tank. So it should be! It is built in same factory as tank! Lel contains 8-bit samples of real drums. Not for Soviet citizens poor-quality analogue imitations of drums. Real drums only! And 8-bit! Capitalist pigs of the West, look upon Lel and weep into your podgy, girlish hands! Not only Lel has 8-bit drum sounds, but also 16 onboard preset rhythms. Party leaders told scientists at Lel fabrication plant to gather 16 best rhythms from all of Mother Russia and our United Soviet Socialist Allies. Result is 16 awe-inspiring rhythms from both decadent West (Rock, Heavy Metal, Reggae!) and also from Motherland herself: authentic Russian rhythms for sword-dance, vodka festival, Red Army Missile Corps march-past and more. You look for American drum machine with Kazachok rhythm or Lezginka rhythm.