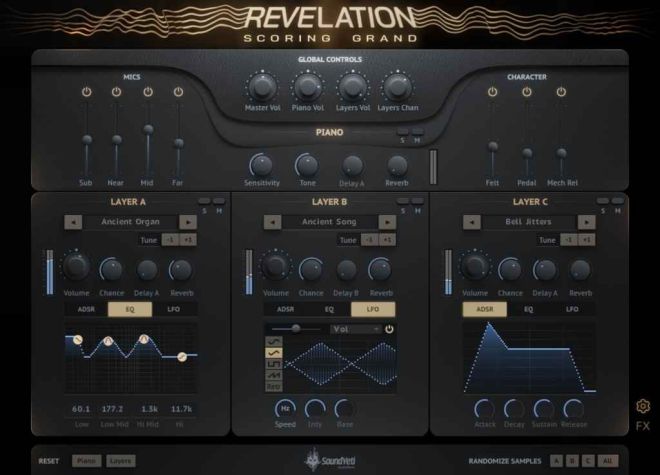 Revelation Scoring Grand uncovers truth telling musicality and unconventional storylines for composers, musicians, even sound designers at every level. Gain inspiration and write your next chapter with sublime underscores, scintillating hybrid keys, complex and sophisticated rhythmics and rich pianistic textures. All complimented with an ample medley of expressive solo grands. Shatter the stereotypes and traditional orthodoxy of blending the acoustic with the synthetic. Take melodic musings to concert hall completion with a single preset and sounds so expressive by themselves, it’s the only instrument you need to create fully realized inspirational cues and compositions.

Nonconformists Welcome
Sometimes to be heard, you need to break the rules, do away with the conventions of today’s sonic expectations. With Revelation Scoring Grand your story becomes clear. Musical disclosures flow with the greatest of ease, like a truth serum for musical storytelling. Unmasking your musical intuitions with a new alchemy of synth and acoustic. Revelation’s foundation is built on a meticulously multi-sampled Steinway Grand Piano (Model O). Four microphone perspectives are beautifully captured; sub, near, mid and far, for dialing in a masterful mix and revealing an extraordinary range of tones and timbers on which your ears can machinate. With much more tonal control than you’ll find even in an ultra sophisticated live session. Mic and tonal expressions are accentuated by the power to add subtle character and mechanical acoustics at will. Hyper-realize the nuance you desire with Pedal, Felt and Mechanism Release for interjecting just the right touch of analog reality into your piano’s speaking voice.

A Power Trio of Layers
On top of Revelation’s grand foundation is a power trio of sampled instrument layers. Easily assign sounds to layers with the instrument’s browser of 50 uniquely sampled instruments, categorized for easy recall. Summons any combination of the three layers and assemble an all-star supporting cast of timbres, textures and tones. Mix for eloquent and subtle compliments to the grand or break some rules and design fully realized hybrid keys, pads, complex textures and rhythmics that become the main character in your musical story. Each stereo layer is accompanied by a combo of sound molding tools; ADSR, Delay, Reverb with 24 custom IR environments, 4 Band EQ and Sound Yeti’s proprietary LFO design with tempo sync, resonance, wave shape selection, fade in control and awesome LFO visualization. Thinking of taking the power trio on tour as the headliner? Simply mute the grand piano and you’ll find this trio is ready for top billing.

Temptations for Tweaking
The irresistible UI of Revelation beckons even those with only the slightest inclination to tweak twist and tune. Easily shape your sound to the perfect musical and lyrical expression. The upfront display provides almost instantaneous understanding of the composition of your sounds and is effortless for crafting your own signature mix.

Works with the NI Kontakt Player v6.5.3 or higher!