REQUIEM is the successful culmination of a dream we have had for several years. We always believed that there was another way of sampling choir and vocals. We believed it would be possible to have completely audio-realistic choir samples with a strong emotional connection. We believed that we needed to cover all the basic articulations, but also add a variety of new dimensions to this powerful type of sampling. REQUIEM was recorded over a period of two weeks in one of the oldest and most known cathedrals in San Francisco. The conductor, Robert Geary, is one of the leading choir conductors in the the US and the choir includes members of his multi-award winning VOLTI choir and members from the SF Choral Society. 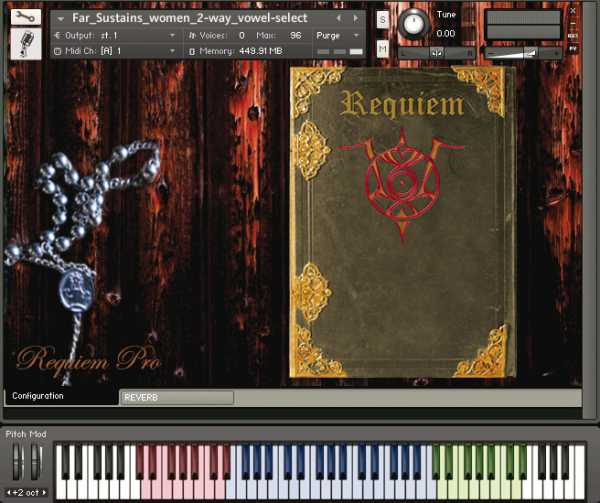 REQUIEM is our dream come true – and now it is yours too.
REQUIEM is the next-generation virtual choir developed for professional composers. The library is based on a variety of new recording- and sampling techniques some which have never before been deployed in choral sample libraries. The library can literally sound like a real choir and includes both full choir (SATB), divisi groups (males/females) and solo singers – all recorded in 24 bit / 44.1khz with a total of 6 unique microphone positions. In Requiem Light, these microphone positions are mixed down into a single well-balanced blend, providing all the quality, depth, power, tone and body of our Pro version, while allowing a signiﬁcant overall conservation of system resources (cpu, ram, storage space and disk streaming bandwidth) and greater ease of use. We’ve simpliﬁed the content to provide just the most essential articulations and presets.

Requiem Light is intended for users who want a professional choir library at their ﬁngertips, without the usual tradeoffs. It’s designed to excel, whether dropped into the most resource intensive orchestral scoring templates or loaded on a laptop for composing on the road or use in live performance settings.

MAIN PROGRAM TYPES
Standard: These programs evenly balance memory use and disk streaming to provide all-around performance and system resource
use. These are ideal for users with above average DAW systems (at least 3GB system ram, dual or quad core, 32-bit OS).

Multi-Pos (nkm multi):
These multi-instrument banks come pre-loaded will all three microphone positions to allow custom
layering, mixing and even surround sound output routing for users with capable systems. The Soloist multi-instruments also include the
4th “Close” mic position in their 3-pos multis.

DFD:
These versions are intended for users with low available system ram. These rely heavily on hard disk streaming to efficiently stream audio data from your hard disk only when it’s needed as a note is playing. Therefore, they may require higher audio driver latency settings, allow fewer voices before suffering audio drop-outs and put more strain on hard drives, especially when other instruments or audio tracks are also streaming from disk.

Time-Stretch:
The Time-Stretch Soloist programs allow basic playback speed adjustment in real-time, using Kontakt’s built-in Time-Machine 2 engine. This speed control is automatically assigned to the pitch wheel, as well as an assignable front panel speed knob. Please note that this Kontakt engine sub-system can cause glitching, popping, distortion, aliasing and other audio artifacts, due to flaws in the “Time-Machine 2″ algorithm used by Kontakt. These programs are includes as a convenience and create tool only.

Users should expect frequent audio glitches and artifacts during normal use. Not all sample content is effected in the same way or to the same degree. Higher notes tend to suffer more than mid-range notes. Artifacts can occur even when no time-stretching is being applied.

There’s no known complete solution to this internal engine-related issue, but it can be minimized or hidden fairly well by layering multiple notes and using reverb or other effects and mixing techniques. 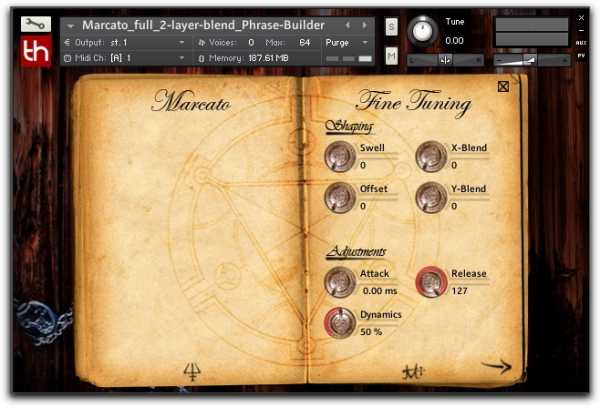