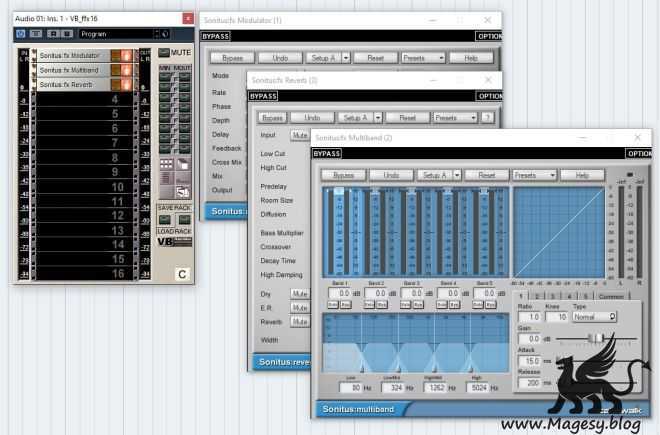 FFX means “effect inside the effect” or “FX inside FX” or if you prefer “Plug-ins inside a Plug-in” As soon as 1999 VB-Audio brought a solution to handle several plug-ins in a basic patchbay called FFX16. This plug-in, which is basically a Direct-X plug-in manager, was the only solution for the chaining of effects in a reliable way (internally, FFX always works with 32-bit float numbers) with programs such as SoundForge for example. Initially designed as a workaround, in the 2000’s, the FFX-rack series was also the only solution to use DX plug-ins in Wavbelab 3.0 audiomontages. Yes, FFX is also available as a VST plug-in and can be used as a DX to VST adapter !

Today, FFX-16 is still useful to build complex effect chains with different DX plug-ins and as such, it is very helpful to handle difficult mastering works needing a lot of processing. Thanks to its preset handling and the possibility to modify the order of plug-ins in real time just by dragging and dropping effects, FFX-series remains an amazing and very handy tool.

A witch says,
We forgot doing FFX-16 last year! Our release works under latest Windows without admin rights, unlike
original version. You don’t need to install HASP/ALADDiN driver to the computer.